In MUTEK venues, nothing is static. Just as the music changes constantly within sets and from one artist to the next, so does the scenography, in subtle shifts and dramatic directions. From real-time manipulation of light on custom-built screens to interactive live video installations, MUTEK's scenography seeks to redefine a term more often applied to theatre.

For a festival focused on the intersections of electronic music, digital art and technology, scenography naturally becomes a fully integrated, floor-to-ceiling audiovisual experience. Here, MUTEK 2017 designers Arnaud Belley-Ferris, Jimmy Lakatos and Guillaume Arseneault of Artificiel, and Dan Irregui let us in on their concepts for transforming Montréal venues Métropolis and the SAT into immersive spaces for music to live and sing, amplified by their experiential environments.

Mirror mirror
Expect nothing less than iridescence and altered perceptions at Métropolis as light surges into every corner or quietly glimmers in the shadows. Lighting designer Arnaud Belley-Ferris reflects light in limitless angles in Echoes, a site-specific project featuring hand-built reflective panels and lights that approach laser-like precision. Similar to all of MUTEK's designers, his goal is to craft scenography that not only accentuates the music but enhances the entire festival experience.

In a scenography devoid of traditional screens, Belley-Ferris can focus entirely on his milieu of lighting rather than on projected images (though a video surprise or two may be in store). Each of the 30 reflective panels in Echoes is a small-scale geography of multiple folds—against this backdrop, the designer controls the lighting in real time, echoing each artist's sonic environment in a symbiotic rhythm and changing the positions of the panels as the sets progress.

“I'll play with the architecture of the space over the four nights,” he explains. “With mobile mirrors everywhere on stage and in the horseshoe off stage, I can manage to bounce light everywhere.”

A musician with an architecture degree, Belley-Ferris was drawn to Montréal for its steady supply of live music – he began working in lighting 10 years ago as a technician at Métropolis, a decision that quickly turned into a life-changing passion for lighting design, a creative arena where he could fuse architectural thinking, technical know-how and more than a few wild creative ideas. Since then, he's worked with festivals and artists on international tour and at Montréal's Osheaga, Igloofest, Nuit Blanche as well as with the Moongarden design team on Matt Holubowski's otherworldly Montréal International Jazz Festival show.

While audiences might not even be aware of it while at the venue, Belley-Farris' attention to behind-the-scenes technical details translates into an atmosphere of singular creative vision and intensity, rigged to tap into the music's emotional core and radiate it across the room.

“At MUTEK people tend to pay a bit more attention to scenography, but sometimes they'll close their eyes and I'm totally fine with that,” he says. “I'm the visual guy, I don't look for attention—that's on the artist on stage, that's why people are coming.” 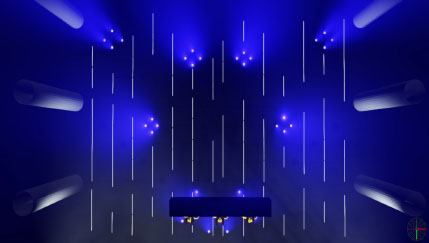 Walking into the first floor SAT space—equipped with 15 screens and more than a dozen cameras on and off stage—evokes a diverted sense of watching while being watched, simultaneous physical states of performers and audiences.

“As video technology emerged in the home and in commerce, we started to see our image retransmitted,” says Arseneault, whose work often hijacks technologies to create novel interactive experiences. “What we're doing is recreating that era, this phenomenon of experiencing that projection of yourself but with all the artifacts of the '90s. We're taking a step back from all the technological development that happened in video in the digital age and trying to grasp the physicality of that medium. There's a lot of technology that was developed as a way of being in motion with what you're producing—we have a great interest in that and the real-time medium.”

Though its concept sounds lo-fi, Sentinelle uses an array of technology—including video feedback, microscopic shots and motorized cameras—to breach with the conventional media representation while  focusing on the performers on stage and emphasizing details in the space. Ten stage-facing cameras provide multiple angles on large HD screens for our viewing pleasure, a creative arrangement of raw and treated footage. Throughout the space, audience members may catch raw images of themselves out of the corner of their eye—and even purposefully transmit their own video to screen through the Airbeam phone app.
>Here Download AirBeam

“People who are moving become part of the scenography because we're transmitting them, but they can also take part in the filming process,” says Arseneault. “That's in rupture with the 90s concept, but we have that technology so why not connect it to these ideas around surveillance and points of view. That way people are being active and can see themselves differently.”

A MUTEK mainstay since the festival's inception, artist and designer Lakatos adds that though he and Arseneault have installed a controlled set-up, it's imbued with endless possibilities created through the combining of analogue and digital. “The music at MUTEK is more in an era of analogue instruments today,” he says. “It's become rare to see a computer-only show, and it's like that for us too, bringing back the old stuff with the news." 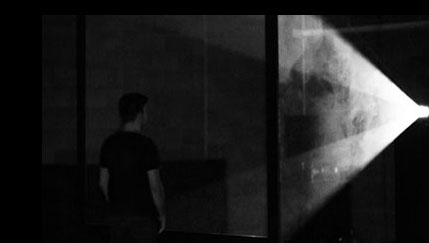 To the moon
Adding an outer-worldly aspect to the SAT scene is Moon, artist Daniel Iregui's interactive installation that lets us “touch” moonlight though a window and hear it sing in synthesized tones. As founder of Montréal-based studio Iregular, Iregui has created interactive visual experiences on grand scales and smaller installations like Moon for individual exploration, mining the infinite and random combinations produced when a system is open to being transformed by its audience.

Using projection as a light source and atmospheric smoke to make the beams visible in a more tactile way, Moon encourages people to explore the light, space and sound in a different way—there is no right on wrong way to go about it. Since creating Moon in 2016 and bringing it to Toronto's Chromatic festival, Iregui has made a few changes: “I constantly modify my work after seeing how people react to it,” he explains. “It's hard for me to say 'I'm done'—if I see something I can improve, I will improve it, whether the clarity of interaction, the instruction or reaction, the aesthetic of it, or the sound. With Moon I've been constantly working on the visual and audio, so for MUTEK it's brand new optimized sounds.”

Moon looks like a sideways pyramid floating in the space. Put your hands through the frame or be bold and step inside to control the light and manipulate sounds Iregui created with an analogue synthesizer, sounds inspired by the description of what astronauts heard while on the moon—their heartbeats, their blood flowing in their ears, the high-pitched sounds around them.

Though an enclosed, intense, even personal experience, somehow Moon fits perfectly in the festival setting, within a much larger space designed to teem with music, visuals and people. “MUTEK is a great place for Moon to be,” says Iregui. “When you're controlling the visuals you're creating sound, so it becomes this instrument that you can learn how to use. I can see people playing it that way; I'm curious to see how that happens.”