Amidst the complexity of a city in flux, MUTEK.SF returns from a successful first year as continued advocates for the San Francisco arts and music community, presenting a festival full of innovative programming like nothing else in the United States. Taking place across a diverse set of venues and featuring an array of stunning artists from around the globe as well as local visionaries, MUTEK.SF is proud to announce the second round of artists set to join the lineup. The festival is presented in several tracks, starting with A/Visions, highlighting the most avant-garde and artful audiovisual and multisensory works in electronic arts and music. Nocturne keeps the energy moving with late-night sounds and sights dedicated to contemporary rulebreakers and legendary tastemakers. The festival concludes with Experience, an all-day, genre-bending extravaganza defining the spirit of the festival’s commitment to our community of creators. Following a tradition of groundbreaking programming and unique experience building, we are pleased to continue the legacy of excellence that began with MUTEK in Montreal 20 years ago. 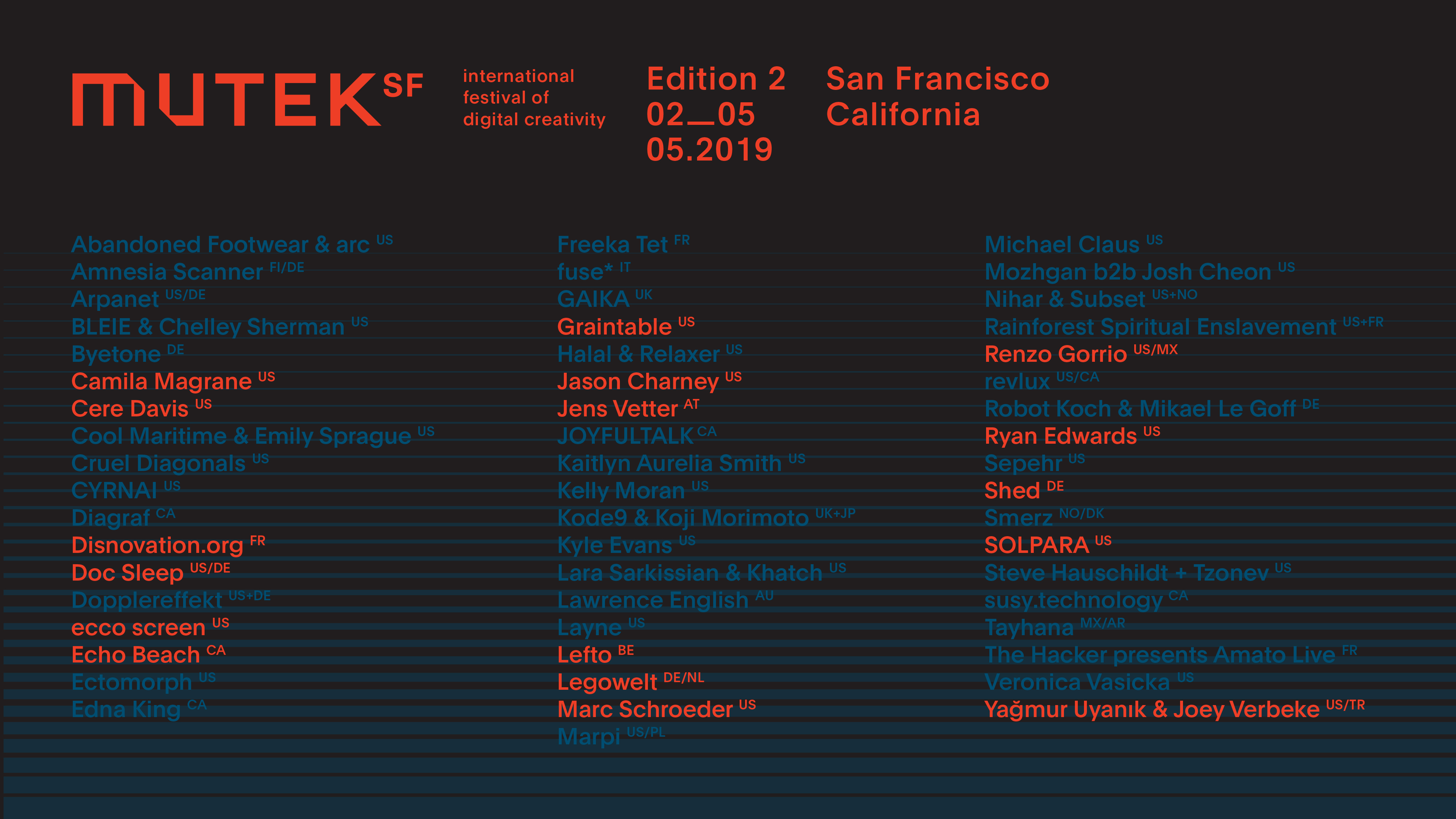 Sunday closes out the festival with Experience, an all-day party at the massive, multi-use complex The Midway showcasing the diversity in programming and style that has come to define the MUTEK culture. This final celebration boasts two dance floors, a slew of art installations and a culinary guest chef—stay all day and wind down with us as we dance the festival to a close. Live performers include CYRNAI (Dark Entries label), the NA premiere of The Hacker presenting Amato Live, Tayhana (of NAAFI label collective), a special live set from synth legend Legowelt, and many more. Alongside these live performers, EXPERIENCE will feature an impressive array of art installations from various artists across the globe, including renowned French’s installation media artist disnovation.org presenting Online Culture Wars, and Gold Currents, a new work from local artist ecco screen.

We are also honored to represent our city’s incredible commitment to food by offering a specially programmed Culinary track, in partnership with the Future Food Institute and led by this year’s culinary ambassador Anthony Myint, a recent James Beard semifinalist and famed restaurateur behind Mission Chinese, The Perennial, Commonwealth, and other endeavors. A portion of the proceeds from the festival will go to ZeroFoodprint, an organization supporting carbon positive farming.

MUTEK.SF would not be possible without the generous support of our partners, including Wunderbar Together and Deutschland Jahr USA, a campaign celebrating  German-American Friendship and the wonderful cultural relationship our countries continue to share. We are honored for their incredible support.